On the Monarch migration trail: It's such a long way

I’m at 10,000 feet in the pine and fir forest of the higher levels of the Sierra Madre mountains in central Mexico. I stand on an uneven narrow path going up Cerro Pelón, watching thousands of brilliant Monarch butterflies dance through the trees above me. A few flutter to the ground, to bask in a patch of sunshine.

I’m a bit deaf, but my friend Ellen who is my companion on this journey (we first met volunteering at Tiny Marsh) tells me the movement of their wings sounds like the rustling of leaves. With my binoculars, I pick out the colonies - the pale undersides of the wings of massive clusters of butterflies gathered on the branches of the Oyamel Firs, the only trees on which the Monarchs will roost.

Some, I think, have made their way here from my home 4,250 kilometres away, in Ontario.

Two months ago, one of them may have passed through my garden, pausing to nectar at the asters, phloxes and Joe Pye weeds. One might even have been one of those caterpillars I raised that consumed impressive amounts of milkweed, to finally eclose from a green jewel-like chrysalid and sail off in a southerly direction.

Those September-born butterflies may have looked the same, but they were quite unlike the other butterflies we northerners see earlier in the summer. The earlier ones emerge as caterpillars from eggs laid in June by a Monarch that had travelled north through the Corn belt, a couple of generations removed from the butterflies that left Mexico in the spring of this year (2019).

The early butterflies go through their metamorphosis, mate, reproduce and die - all within the space of a few weeks. Another generation does the same, floating through our meadows and wetlands, along road verges and beaches and into forest clearings, always searching for the milkweed that is the only plant their caterpillars can eat and therefore the only plant the female butterfly will lay her eggs on. 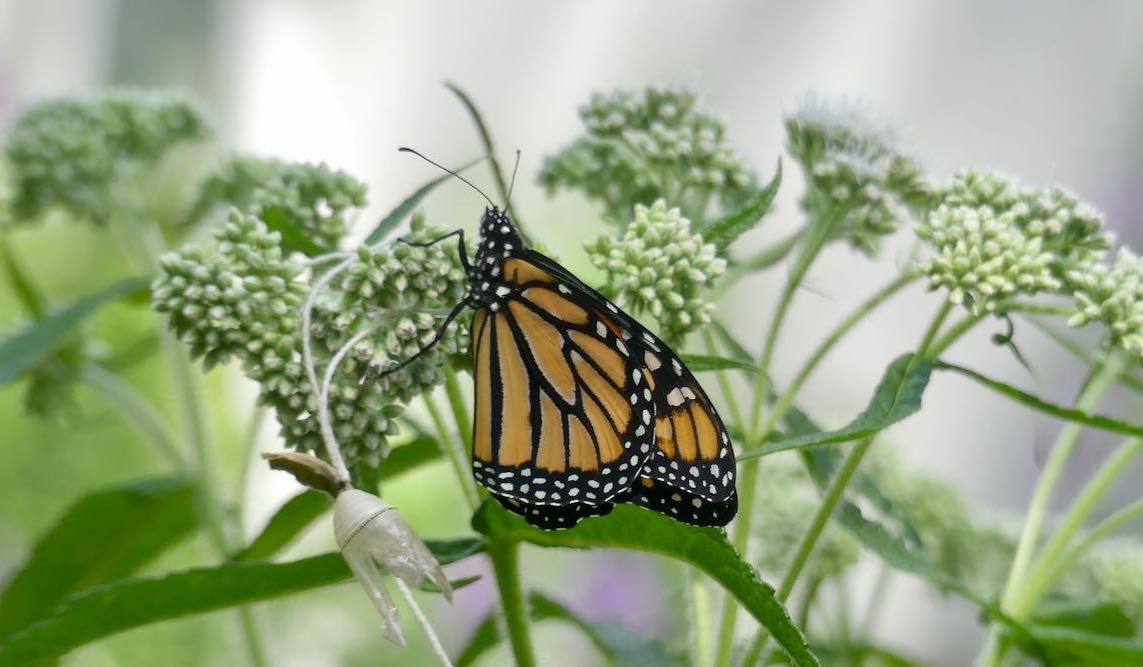 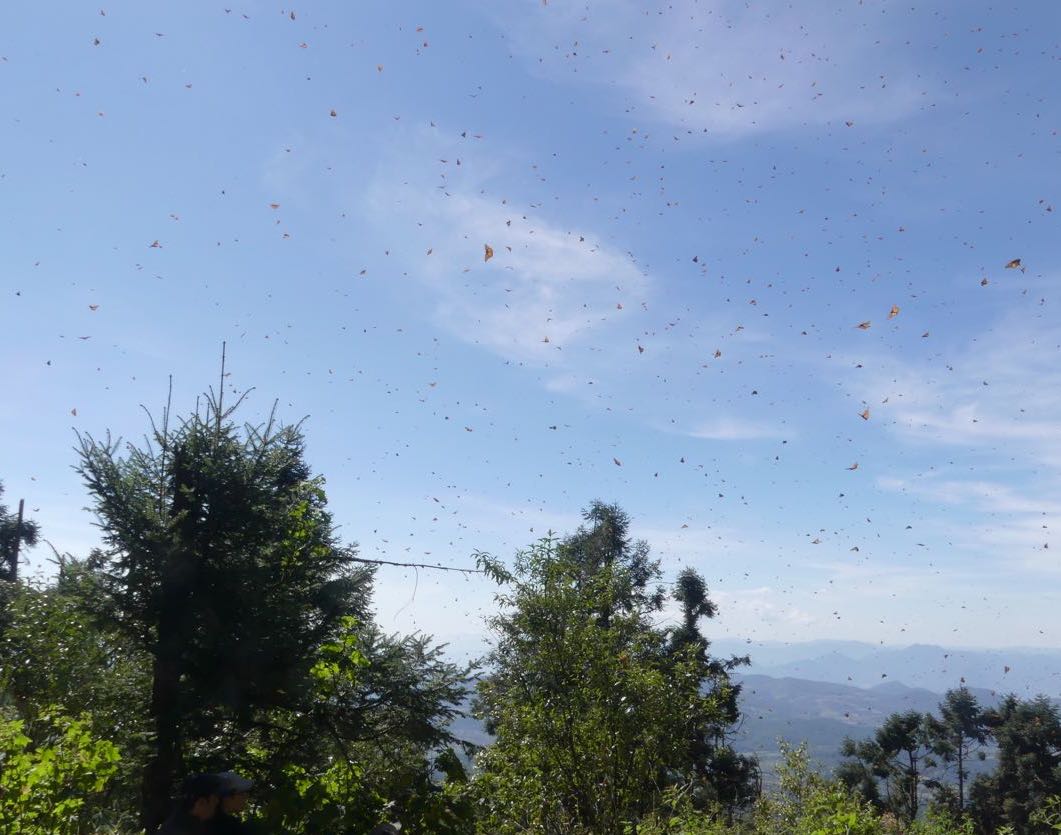 Top, departure: a Monarch in Elmvale, Ontario leaves the chrysalis. Bottom, arrival: Monarchs soar through the air at Sierra Chincua

But the last generation to emerge is different. Its members will live for as long as eight months, in a state of reproductive diapause, which means their sexual development is delayed. Over the winter in Mexico, they will mature, the females will mate with multiple males but they will not lay eggs until they have travelled north through Texas next spring, in search once again of milkweed.

For me, the journey south was relatively comfortable. By taxi to Pearson airport, by plane to Mexico City, by taxi to the bus terminal, by bus to Zitacuaro, by taxi into the mountains to Macheros where the JM Butterfly B&B near the base of Cerro Pelón is in a butterfly sanctuary, then by horse and finally on foot, up a steep and rocky mountain path. In the last stretch, I found the going tough because of the altitude but still, all along the way I had food and drink and people to make sure I ended up where I wanted to go.

The Monarch’s journey is very different. It is threatened in every conceivable way. Adverse winds can delay departure, a storm can kill millions, fuel is hard to find as herbicides have taken wildflowers out of fields and development has paved over fields. This year a drought in Texas aggravated nectar scarcity. Milkweed is not essential to the southerly migration as these sexually immature butterflies won’t be laying eggs, they just need good nectar-producing flowers. (But they - the very same insects that have flown down to Mexico this fall - will be looking for milkweed next spring on their northward journey).

Other hazards have been left unexplained. In late September, thousands of Monarchs fell out of the sky onto a neighbourhood on Kent Island in the Chesapeake Bay, distressing residents who gathered the dead insects by the bucketful. The Maryland agriculture department denied that a spray used to kill mosquitoes could be the cause.

Every October, as the Monarchs converge on their wintering grounds, the population funnels into a narrowing corridor. Residents in Kentucky and Oklahoma reported a constant flow of butterflies passing overhead early in the month. By the time it reaches Texas, the flow is a torrent. And here’s another hazard: cars and trucks. Millions of Monarchs die in collisions with vehicles on Texas highways. Researchers from Texas A&M University are working with the state’s transportation department to identify “roadkill hotspots” and to devise mitigation strategies. 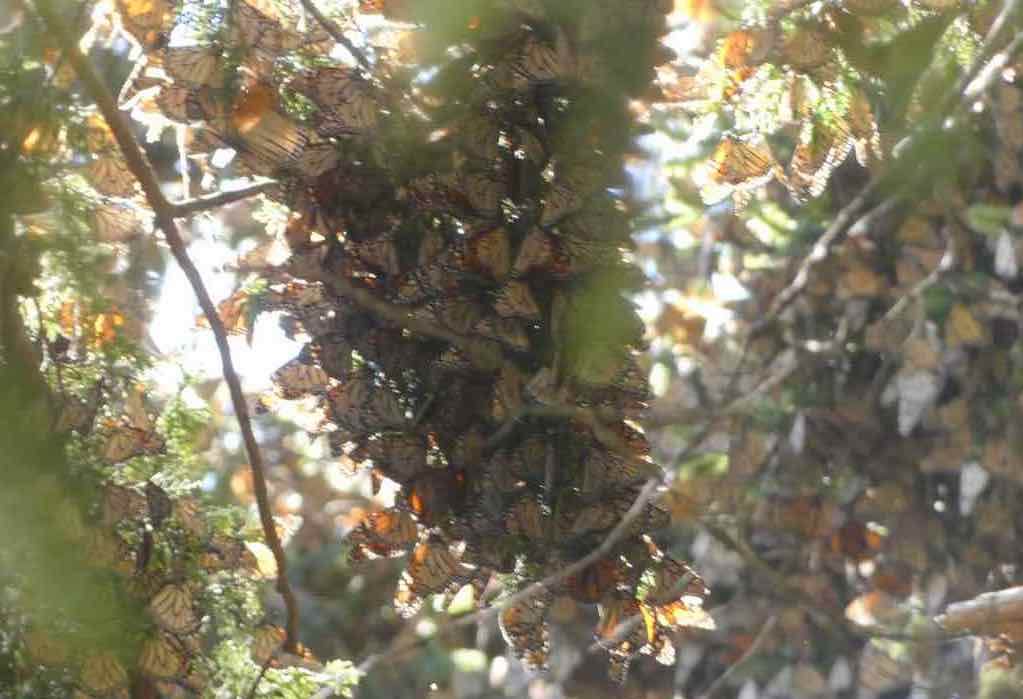 The butterflies huddle to keep warm, and go for short flights as the sun heats up: a roost on Perro Celon

No one understands exactly how the Monarchs know their way to the few hectares of forest that provide them with the exact conditions they need - the Oyamel Firs acting both as an umbrella to keep them dry and a blanket to keep them warm. The returning individuals have never seen their roost in Mexico. This is the only migration that spans four generations. It’s thought the Monarchs navigate thanks to a combined reading of geo-magnetic forces and solar and stellar positions. Sensory cues such as sound and smell may also feature.

Every year, the Days of the Dead festival is celebrated in Mexico from October 31 to November 2. It marks the end of the rainy season and coincides with the return of the Monarchs that are believed to hold the spirits of the departed. Sometimes the ‘Mariposas Monarcas’ are late, but this year, they arrived right on time. They were joined by hardy emissaries from Canada, the Monarch Ultra relay runners, who started their journey in Peterborough September 19 and crossed the continent in tandem with the Monarchs, ending at the JM Butterfly B&B in Macheros on November 4. The run was the brainchild of Carlotta James of Peterborough, as a way to spur protection of biodiversity. We are at the B&B a few weeks later; the excitement generated by the arrival of the runners at this tiny remote village still reverberates.

A hallowed insect. A sacred fir (Abies religiosa). A magical plant - toxic to almost every other creature but vital to the Monarch. An epic journey. Potent symbols of connections we need to learn and live by. A butterfly born in Elmvale has to travel to Macheros to maintain its species. The continent is an ecosystem.

Such a long way. At 4,635 km, this is the longest insect migration in the world. Other migrants travel longer distances, the Arctic Tern holding the record, 70,400 km from the Arctic to the Antarctic. But none travel in such numbers - the population was estimated at 1 billion in 2008 when UNESCO granted World Heritage status to the Monarch Butterfly Biosphere Reserve that had been designated for protection by the Mexican government in 2000. Alas, the numbers have been plummeting. The 2016 count is thought to have been 150 million, an improvement over 42 million in 2015 but still.

The MBBR spans the state of Michoacan and the state of Mexico, and covers 56,259 hectares, a little bigger than Springwater Township, where I reside, which measures 53,600 hectares. Springwater has a population of around 20,000. In 2008, at the time of the UNESCO application, the MBBR population was estimated at 100,000 residents, most of whom are very poor and rely on agriculture and forestry for their subsistence living. Much of the MBBR does not belong to the Mexican government, but is owned privately or communally by people in a variety of dispersed settlements.

The butterflies occupy only a fraction of the reserve. The colonies move around, so it’s anyone’s guess where they will settle each year. The actual number of hectares they will cover is a matter of intense speculation each fall; this year Chip Taylor of Monarch Watch is predicting around 4.7 hectares, down from last year’s 6.05, which was an improvement over recent years but only one third of the total 18.1 hectares in 1996-97.

As can be imagined, the butterflies’ winter habitat is under pressure. The threats include commercial logging, both legal and illegal, clearing for agriculture, forest fires and, of course, climate change. These beautiful butterflies on Cerro Pelón don’t know it, but just getting here is the least of their worries. There is hope, however. Good things are being done, not least by the owners of JM Butterfly B&B who have set up a charity - Butterflies and their People - which employs five foresters whose presence on Cerro Pelón has helped reduce illegal logging.

I visited two other butterfly sanctuaries - El Rosario and Sierra Chincua - while in the land of the Mariposas. I’ll be writing more.

Butterflies and their People